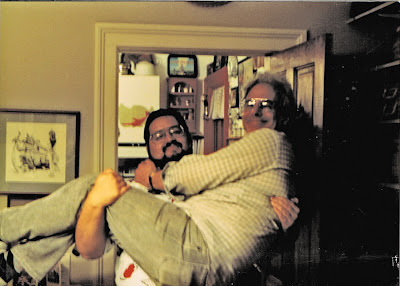 A boy and his hero.


It has been a year since I received the news that my fiend and one time mentor Al Williamson passed away, just a month after his long time friend Frank Frazetta also passed on, shifted into another reality.

I can never think of men like these artists, men, as nothing less than immortal, their art, their visions linked in a great chain still lives on in me and a zillion other people who were touched and inspired by their work. Their work still can inspire me at any second and it lives in me, literally is a part of my art existence, deep down in my art engine. The flesh may pass but what both of these men gave the world will be eternal. How lucky we all are that their art is still here as alive and vital.

It has taken me a while to process my feelings and thoughts on these two great artists and towering figures in the world of comics and the larger one of fantastic art. I never knew or met Frazetta, but I worshipped at his alter like just about any artist I know who was into comics and animation, fantasy art, etc. How could you escape him, he so influenced the art world that you would still get influenced by him through other artists who were influenced by him even if somehow you never knew his art.

That culture, what was then called sci-fi, or even geek culture is really now mainstream culture, and I grew up and into it in the 70's, from being a fan and aspiring artist into a professional in the 80's. Frazetta was a pillar for me, a giant, like Jack Kirby, always the top of the mountain and always there to inspire--his vision shaped my vision of the world like gravity bends light.


While I never met Frazetta in person and never got around to seeing the museum of his art, much now to my loss as its gone as the family appears to be auctioning off his work, I did get to met and know Al Williamson, and I am the better for it.

Al was a great friend and mentor to me in my late 20's, a figure who loomed large artistically to me and was a bridge to many great artists of the past as mentors or teachers can often be. He so gracious, kind and helpful too me in the stage of my growth as a young pro was the dream of what a big-time cartoonist should be. He had the life anyone could want as a professional cartoonist --success, great talent, family, home, studio--you name it--and for me he was a living, direct link or portal back to the classic era of comics, comic strips, illustration, American cinema and pulp/fantasy fiction of the last 100 years. He was also maybe the last hero I will ever have. AS you get older its so much rarer to have any heroes at all, life just produces less and less and it seems at times more heroes with feet of clay than anything else. 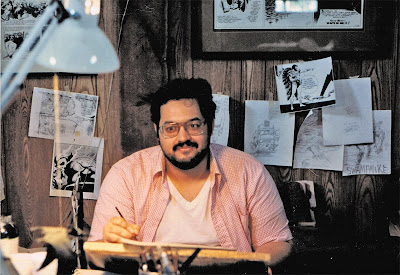 A pic of me in Al's studio.


Through my friend Bret Blevins I got to meet Al after Bret moved up to Honesdale, PA to share Al's studio. I would often truck up the North East extension taking the three-hour drive from Philly to hang out with both of them in Al's studio, a converted carriage house behind his home on Park Street.

It was like the Mecca of comic art for me, like a Camelot of sorts and Al was such a great guy; he was very charismatic, open and down to earth. He also had the greatest collection of comic and comic strip art ever. Foster, Raymond, Salinas, Robbins, Wood, he had it all, and collections and old newspaper strips clipped, it was like a treasure trove of art! He owned maybe the most important piece of comic strip art, The Bridge Sunday featuring Prince Valiant fighting the Vikings. Just look at Frazetta's EC cover and you can see the direct link to Foster for both men.

In the evenings I would stay late literally gorging my brain on the art in Al's collection, trying to learn the techniques and secrets of the masters of comic art. You can learn so much by looking at the original art and I did. I would drive out 17 miles to the little cabin I was renting on Duck harbor, my head so stuffed with art I couldn't take anymore--Drunk with art.

I think I learned more in the brief time, grew more in that time I shared with Al than any other as a cartoonist. I continued to grow obviously, but that was a hyper time for me and Al was also instrumental in getting me back in at Marvel Comics. He kept a Steve Ditko job on Daredevil that Ditko had done as a fill-in, but since it was breakdowns, loose, loose pencils, basically like those rough figures you see in a “how-to” book. Al didn’t feel comfortable working on such loose work, but I said if he kept it I’d tighten up the pencils for him. He did, talking it over with the editor, Carl Potts. Then I proceded to pull out my Ditko and Wally Wood comics and tighten up the pencils and then Al and I both inked the job. When he sent in the story carl raved over it and Al gave most of the credit to me, and that got me in at marvel working for Potts as a regular inker which lead to my regular work penciling and inking at Marvel. That’s the kind of guy Al was.

You could never meet a bigger art geek for the classic strips than AL. And the great thing was Al would be there showing you this stuff he had collected and he was right there with you, geeking out over it too! Many a day I would drive off and come back with Donomite Donuts and coffee and then Bret, Al and I would sit in a circle in his studio just going over art and talking...those are some of my most cherished memories. "Foster was the greatest" was often heard and repeated, along with a tape of classic films cores featuring Korngold, Max Steiner, Newman and more. I don't know how many times the scores for Captain Blood or Sea Hawk playing over and over and over. We'd all laugh and get a big joke out of it. I tried to introduce Al to new stuff, and he liked some, but he still loved his old scores. 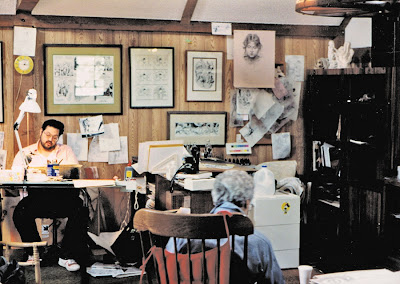 Here is a pic of Al and me taken by Bret, Al is sitting with his coffee and looking at probably some Hal Foster or Alex Raymond or something else from his library.
Al might have been in a tie with Fory Ackerman for being the original fanboy, for Al was such a huge fanboy deep down still 12-years-old, and I think that is part of what made him a success and so good, he really loved the great stuff and he could just link up to it and go, and did for a career that last 50 years. Who is so lucky to do what they truly love for that long?

I miss those days and I miss Al with his big laugh, but looking at any of his work brings it all back, and in that way maybe we artists are a bit luckier than most—our art makes us immortal. So here’s to Al and Frank—the immortals who I hope never fade as long as anyone enjoys great art, fantasy and adventure.
Posted by Mike Manley at 7:25 PM

What a wonderful tribute to a great friend and mentor. Very nicely put, Mike. Thanks for sharing your happy memories of those good times and good friends with us.

my best summer ever was spent with Al Williamson. Thanks for the memories.

Thanks for sharing these fond memories!

I never met Al but have always marveled at his work. The sketchbook just put out by Flesk is quite a treat and a bit of an insight to his process.

I did meet Frank at his 80th birthday party at the museum - the NCS honored him with the Milton Caniff award and his pal Nick Meglin was there as well. It was all through some incredible luck that I was there and even more to a tribute book that the NCS and Jack Pittman put together. Frank saw some prelim doodles that I had done - and completely unsolicited made the comment:"who did those?" and when I said I had, he followed with "those are good." Boy, that made my day and will be a lifetime memory!

Meeting heroes has always been a dicey proposition for me - but I was very glad to have spent that afternoon in 2008 with Frank!

I hope more is done to document the lives and working process of these masters and others - hopefully during their lifetimes!!!

Wow! Thanks for that Mike. Yeah he was a great artist. One of the best.

That was so cool to read about, Mike! I just bought the two Library of American Comics books of X9:Secret Agent Corrigan of Al Williamson's work with Archie Goodwin. Just terrific stuff. Al's work on that strip was some of the best comic strip art ever. I think Al would really enjoy your talent and work on Judge Parker.

Great piece - thanks for sharing... cool anecdote about the film music...

I only knew Williamson through his work, but this is exactly what I would have hoped he would be like as a person if I could have met him. Thanks for sharing that side of a great artist.

Hello, How do I get in touch with you? There is no email or contact info listed .. please advise .. thanks .. Mary. Please contact me maryregency at gmail dot com

Mike - thanks for sharing your memories of my dad. It's great to read about him and the impressions he made on so many people. All the best, Val