This last weekend was the annual Philly Wizard World Con, held in Center City Philly at the convention center. 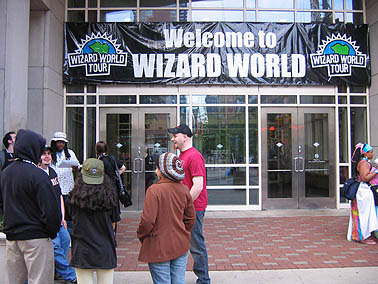 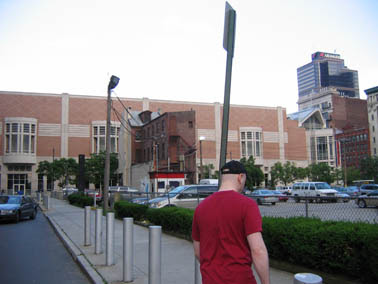 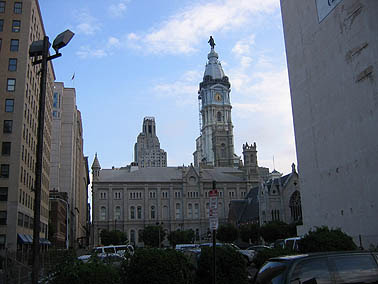 Despite reports that the attendence was topping 27,000 this year, the show seemed less 'magical". I think a few things are going on here. For most artists NOT on a mainstream superjock-babyman- book, the show was down. I heard that from many artists. Of course Wizard is all about the mainstream.

I do the show to promote me, sell me, do sketches and promote Draw! magazine and all my products and even recruit a few students for my classes at DCAD..but also Philly is about hanging with friends. Because of it's size and great location to resturants Philly Wizard is a great smooze con, and less stressful than San Diego, so it's good for business too, contacts etc. I think the economy being still sluggish and the rising cost of all entertainment hurts as well. I think fans have to be even more choosey on what they spend their nerd bucks on. 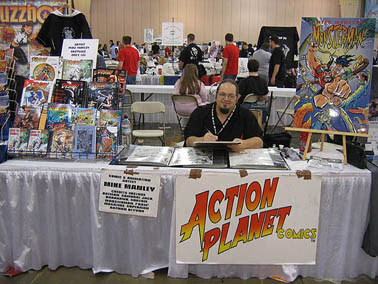 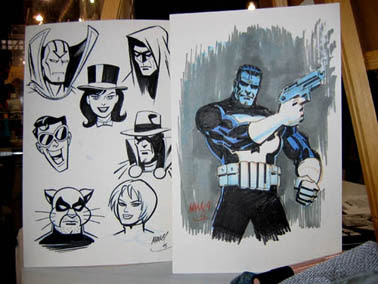 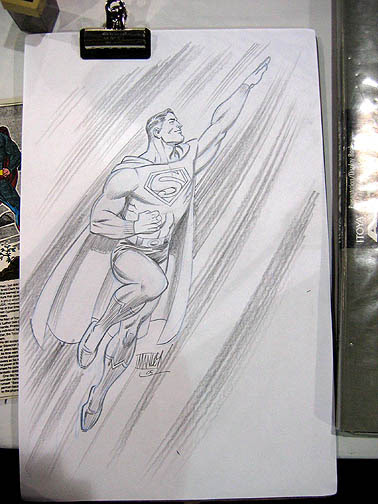 Some of the sketches I did for fans at the show

If you are are an official guest, a TV person etc, suuure, you probably did OK. A few big publishers were not there like Tokyo Pop and Viz etc. They were at the
Book Expo in NYC at the Javits. They know where the reallll $$ is, and it isn't babymen. Traffic was ok, but never seemed to be heavy in Artist Alley, even on Saturday. 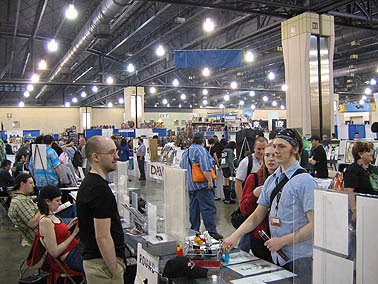 I'll rethink what I do for next year. Maybe the bad weather also hurt on Saturday? Maybe the show was laid out different too, separting gamers etc.? There was less drumming mind numbing music blasting and the publisher area again seemed much smaller. The lack of the huge Cross-Gen booth was obvious, but there was the usual parade of fans in costume like the following pics. 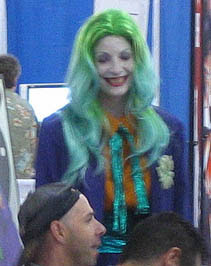 The Star Wars costumers even had their own spot in artist alley where jawas and Darths, sandpeople could get a bottle of water and change out their parts or whatever they do...Roger, Roger! 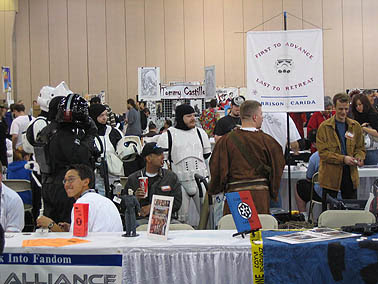 Sunday was a hot mother, almost 90, and with the humidity from a few
days of rain, well lets say the streets of China Town smelled like a
sourmilky old man's ass wrapped in a brown lettuce sheeth of garbage!

But I had a good time, I guess I broke even, despite my thirst for apple
martinis...so I can't complain too much. I had a great time seeing friends and fellow artist. I didn't walk the whole show even once, never went over
the the publishers, didn't buy anything. I manned my station except for
the frequent pee breaks. ( more on that later) I had no urge to buy more crap, or books, I'm saving that $$ for san Diego con where I can buy the books I really like, the European ablums from artists I love. I like the social aspect of this con the best.

Once again San Ki Duck house on 9th and Vine a few short blocks away saved the day 2 nites in a row as large parties are no problem. They also don't put any MSG in the food for those who sensitive to it like me. Sometimes we'd have 18 people going out to dinner.If you don't have reservations you are kind'a screwed as the weekends are busy. Philly is a great city to walk around and eat in though. The Wizard people do run a good smoothe show though, I have to hand it to them, i don't agree or like a lot of the "fannish philosphy" of the magazine itself, put they do put on a show that's easy to set up at. I'll be back next year. 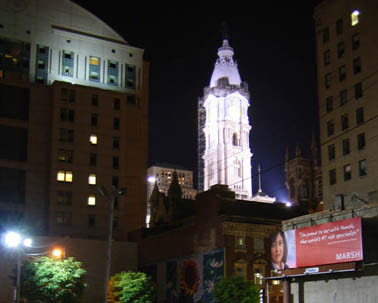 Enjoy the happy memories!
Posted by Mike Manley at 1:15 PM

What is your definition of:

The last time you mentioned babymen you were talking about Green Lantern. Is that an example of the books your talking about here?

What is PWW anyway? Is it one of those con thingies filled with fat balding nerds who live in their parents' basements and couldn't get laid if their lives depended on it? You make it sound almost cool, although it's still not something I would consider worthy of getting off my ass and doing. As I said before, I'm not much into comics except for the ones in MAD filled with cursing, dirty jokes, people getting hit on the head with frying pans and so forth. What other cons have you been too? The only one I've really heard of is Otakon, which is supposed to be this big anime thing that happerns every summer around late July/early August in Baltimore. Have you ever been there?

I really like those sketches, Mike. You knock that stuff out the box.

Thanks Jamar! SPJ, yes it's just like you describe, but there are also way more cute girls than there used to be. Wizard is a magazine, sort of the Entertainment weekly crossed with People and Starlog of comics. Think slick-nerd.

There are good peeps at the shows too and plenty of pathetic types who don't bathe and smell bad, the quinticential nerd. But you can have fun too. San Diego hosts the biggest con and it has everything from Lucas Film to other movie companies coming down and having set ups, Nicalodeon, tons of manga publishers and old comics, just about everything you can Imagine.

I hear that japanese con you mentioned is supposed to be cool. But then cute girls dressed up i n cat hats and sailor moon is aslways cool to a guy :-)

I'd say check it out, there is aslo a great comic con in Baltimore in September that is really nice. You should be able to find plenty of old Mad magazines there.

I've never really found cons interesting before but you make it sound like lots of fun. That thing you mentioned about old issues of MAD is especially interesting. Since I have started collecting MAD I have gotten at least one issue every month, except January. It was really cold then so I didn't feel like walking six blocks to the nearest Rite-Aid, and sometimes they don't even have it so I have to walk all the way to Wawa which is twice as far.
I have also noticed that Mad publishes two copies a month: the regular one and the XL version. The only months I got both copies were November and April. Of course I could just suscribe, thereby guaranteeing that I would get MAD each month (and save a shitload of money too) but that would mean they would have to shove it through the mail slot everytime and I am really anal-retentive about the way my MADs are kept. I can never leave my brother alone with one of my magazines because I'm afriad he might wrinkle them. Well, this post has gotten really long and I have finals tomorrow so I'll stop now.

Good luck on your finals SPJ. Mad was best before 1975 I think. The art and writing were much sharper. You made me laugh with that crack about your brother mangling yer Mads. that's what brothers do....

I was one of those 27,000 at Philly Wizard World. Hadn't been to a con for eight years, and I was worried that an old fanboy of 40 could deal with the craziness. I stopped at your table, discussed with you about stuff that's going on with you: Draw magazine, DeCAD, availability of commission work; bought a couple of sketchbooks; lusted at some of your old pieces; lamented at my finacial shortcomings in purchasing those gorgeous pieces. All in all, having a great time meeting one of my favorite artists. Thanks Mike!

Lud, well good to meet cha'!
Wizard put on a pretty good show, I have to hand that to them. And as far as art and commissions you can always get ahold of me for those. I have to say I really had a good time and met many nice fans. I am pretty grabby about the state of the industry as a whole but it's up to me to carve out my nitch.

The Con sounded fun. I live in Canada, so not much Cons go on around here except in Toronto.