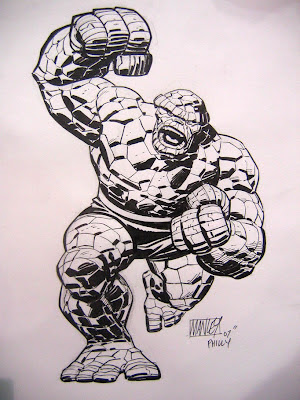 A Thing Sketch done for a fan

Yesterdaay was the big day of the 3 day show and I have to say it was much smaller than the last Saturday of the con I attended. I think the show has really been hit hard by a variety of things, other cons, and maybe just the natural flow and ebb of things.

Even at it's bussiest it was 1/3 of the best show, the first WWP 5 years or so back. Artist Alley had business, but often there were dead spells and of course lots of lookie-lous kick'n tires. A few families, but not a lot. The Marvel and DC booths had traffic, but when I went by, nothing like previous years, where lines would stretch. I would call it a small regional show now, like Pittsburgh. I've done OK, not great. made my costs back and depending on business today, amybe some extra cake, but not a lot. I know some artists in artist alley had probably almost no business. At no point was it ever hard to walk the isles.

I never go to any of the panels, in fact I never liked panels much, even as a teen, and realy sort of find them boring. I hear from some fans they had less of them this year and overall the show has a calmness to it, not a lot of energy. A few customers told me they thought they'd try this show as a change from other regional shows like the NYC shows, but let's face it...there are too many goddam comic book cons now.

This is a fact nobody can deny and I think as a result we are seeing people now really have to pick and choose. There is literally a can a week it seems or every other week and most fans are aging fans, many with families and since there is virtually no new blood coming in people have to start making choices. There isn't a lot of money now in comics, publishing, artistically and as a business. people have to cut corners and miond the budget. You can clearly see the results at a show like this. 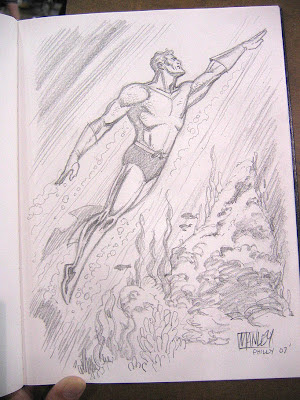 There was plenty of room in artist alley so there was no where near a sell out. I have to say I admire the moxy of some of my fellow comic creators , especially the small press guys who buy tables each year, many loosing money it seems as they do almost no business. I even saw Marv Wolfman with nobody at his table. Maybe artist alley wasn't the place for him. Wizard does little to promote or help this end of the con which has to contribute a fairly significant dollar amount to their bottom line at $300 a pop. I think they could continue to announce to the crowd to visit some of the people in artist alley, hell , even call out booths. I think many people still don't know about artist alley, and certainly who's there.

I think it's a shame in a way this show has suffered. Philly is easy and very cheap compared to most major venues and cities, easy to get around and get to with bus and regional rail. I think its clearly poor marketing on Wizards part coupled with the crazy amount of shows every month. Wizard does have a great show staff though i give them AAA for that, nice, friendly helpful people all around. San Diego could learn a few things about being nicer, the security there is like WWII germany at times.

But I am having a good time. I got to meet a lot of nice fans, do some fun sketches and drawings and chat with comic pals which I always enjoy the most. We ate great Vietnamese food last nite and hung at the marriott in the bar, the annual bar hang of the con, but there wasn't much of a crowd or any peeps we knew so we booked early. So off to the last day of the show....
Posted by Mike Manley at 9:49 AM

Terrific Thing, Mike! I see a lot of Joe Sinnott in the linework. Very nice! I'd love to see you on FF.

When I was young (so much young than todaayyyyyy aayy ayyy) I was always reading comics. Spiderman, captain America, Hulk, Ironman, FF, Narmor... All were a part of my life.

Now, sometimes, I bought already comics. Most of the time I'm so desapointed : I can't recognise the heroes of my childhood.

That why I love coming here. Under the pencil of Mike, I can't see again all my all friends...

Your "Think" is wonderfull. Oh the happy fan !

thanks for that Aquaman sketch, Mike! I LOOOOVE IT!

Rob, Thanks, it was fun to do.

Thanks Mike, yep, Joe is a big influence.

Thanks UB, I was in the flow that day.

Yvon I know what you mean. I think some of the books are so off character that to a lot of long time readers they characters are alien.

I draw the Thing as I like to see him...classic. But that said there are many good interpitations out there, some modern too, I just dislike the meanness.