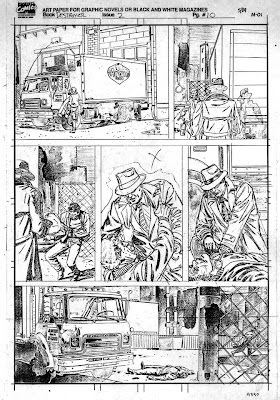 In the next issue of DRAW!, Bret Blevins and I are doing our Comic Book Bootcamp article on working with photos. The page above is from an issue of The Destroyer (better known as Remo Williams to you)I did around 1990, fresh from my stint sharing Al Williamson's studio. At that time I was really into doing the "Classic American Realist Style" as I call it, following in Al's steps and the steps of the great American realistic Comic strip artists like Alex Raymond and Stan Drake, etc.

One of the tools these artists employed to create such believable artwork was the use of photography for backgrounds and for figure work as well, often shooting the photos themselves, and like Al, often using themselves and friends as models.

In the page above I shot the pictures of the truck and the background myself, walking around then West Philly neighborhood I lived in at the time near U-Penn. Then after getting the pics developed I drew them down on the page using my Art-O-Graph 360 projector. Then using a blue wash, made from a light blue india ink, i washed in the black tones instead of using a pencil.

I stole this idea from Bret, who got it from looking at some old art and noticing that the artist used the blue was to "spot their blacks" instead of using the pencil to shade them in. the idea is that is kept the page cleaner and you could put the blacks in faster too. The ink was diluted to a color close to non-photo blue, so it wouldn't show up once it was shot for reproduction. Al even did this on some of his old strips to indicate where he wanted to put the zip-a-tone, or Ben-day dot screens. The blue wash you can see on the pencils above is a bit spotty due to the old xerox copy, but below you can see how Al handled the inks in his usual spectacular manner.

This "old-time" process was 15 years ahead of what many cartoonist do now by printing out the pencils in non-photo blue on the comic paper and then either going straight to inks, or tightening up the pencils. That's how I do a great majority of my work now. It's amazing how often as an artist you will think you've come up with a "new way" of working only to find somebody else thought of it 30 years before you did. 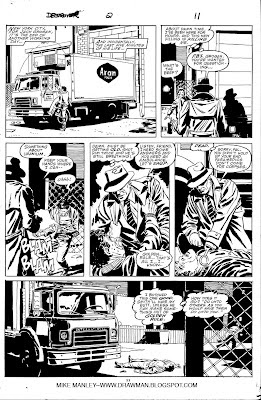 I'm not sure how I found your blog originally but after watching and reading for a couple of months now I'm certainly glad I did.

Thanks so much for all the information and sharing. This stuff is invaluable and well appreciated.

Can't wait for the new Draw Mike. Just wondering, what sort of nibs and brushes did Al Williamson use?

Dylan, this is sort of an teaser for the article in the next DRAW! Bret and I am doing on using photos.

Anyway, to answer your question, Al was using Winsor/Newton series 7 no. 3 brushes, and then we for a time found a great outfit that made awesome brushes, but they went out of business. As far as pens, he was a fan of the Hunt 108, it came closest to the nibs he used back in the day that were discontinued years ago. I think he also use to use a Gillot nib of some sort back in the day which he always complained was better than the crappy art supplies we have now.

I still use an old lap board he gave me every day, one he used to use way back, even drawing old EC comic and strips on.

What a smart simple idea! THANKS MIKE!

The first time I saw the blue wash was on Brets' New Mutants art. It was impressive!

I love the truck on this page---beautiful work.