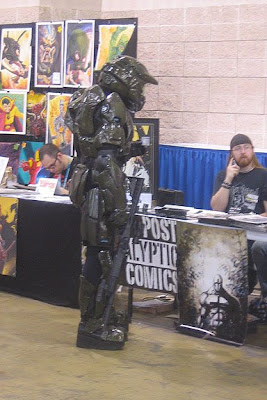 I have been getting some very good feedback on my post from the Philly con this past weekend and it brought up some thoughts on the show and the bigger cultural shift I see going on in the last few years.
The thing I noticed is that the costume element is the thing the media picks up on, all the local coverage in Philly basically played up this angle and the TV and movie actors..they could give a fuck about comics and artists, it's the cosplay-geek in a costume angle that appeals to them it seems. My theory about why this is happening is that it's because Halloween is such a huge holiday-soon to be as big as Christmas, adults now dress up. LOTS of adults. Geek Culture has really invaded mainstream of American life almost like crank and become acceptable, "normal" if you will.

People 60 years old play video games. People having these 'alternative" lives or second lives away from their daily life as accountants and bankers, teachers and moms is a lot more common than we probably think they are. Look at all the fat chicks that love the fantasy fair shit, dress up as wenches--fat acceptance! The Fairy con, the Suicide girls, you name it. some people use this maybe as way to gain acceptance,empower themselves, or esacpe, to be able to express something, be it fantasy, fetish or just the need to let the shit inside--out.

There is a huge need for so many of us to have a life that seems better, not so mundane, we want to escape to the fantasy world where 5 dollar gas, Aids ravenging continents, polar bears drowning, isn't every day news. I think globally this thing has just exploded because of all of these issues and people just don't want face the ugly, the grey, the sickness and feel powerless.

I'm sure if I was smarter, a PHD egg-head, I could make a zillion bucks off of this, but I think within a decade people will live these fantasy designer lives, be able to live a Theme Park Life. Groups of people will be able to live in these fantasy communities. I know that because I drew and lived in a bad neighborhood as a kid, had to see lots of violence and at times felt powerless and trapped, the fantasy of Superman or Batman naturally appealed to me. Who wouldn't want impervious skin when the drug dealers next door started shooting at each other and the bullets hit your house? Who wouldn't want to be able to put the fire out with your super-breath when the bad guys tried to burn your house twice?
I know why I like fantasy, why it swept me up as a kid.

We all have our reasons.
Posted by Mike Manley at 11:18 AM

Interesting... I'm sure there's a lot of truth to what your saying.

As you have mentioned costumes and the NYCC in your last two posts, I thought I'd mention an observation I made, having been to NYCC and Wizard Con Philly this year. Though there were a lot more people at New York, costumes seemed much more prevalent at Philly, at least the more classic heroes like Batman and Superman. At NY, it was all manga/animae characters (almost entirely Naruto and Avatar). I think there is a big shift in the comic book culture, and the Wizard Con clearly isn't keeping up.

There were plenty of Marvel and DC, Classic heroes in NYCC, but they were just a fraction of the Cosplay there. i would see groups of 3-5 girls in some manner of costume and they back area was always a constant flow of costumes and such, contest, heck, I don't even know, every time I passed by.


It's more pop culture and now pop culture is animae because it's all really becoming one world culture now, and the world in the lives of most people under 30 means video games and Japanese stuff like cartoons and comics.

Hell, even Warners and Disney have put their stable of characters on the side tracks of cable like Boomerang, etc.

the shift already happened, happened a while ago, it started in the 80's, the speculator boom and insular and myopic Direct market was at times dumb, greedy and arrogant. They went for foil covers and missed the boat.

Video games are just another form of entertainment escapism. Video games are to me, what comci books are to you Mike. Why listen to your parents fighting for the umpteenth time, when you could be rescuing Princess Zelda? When you feel like you have no control over shitty situations in your life, who wouldnt want to be in complete control of a 7ft tall super soldier who can save the universe with the press of a button?