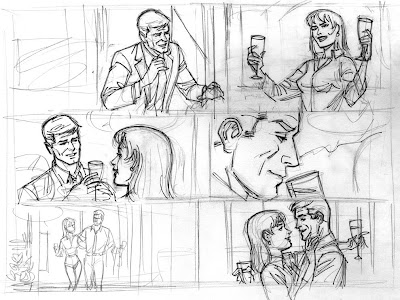 I thought I'd cover my process for some of the Judge parker strip starting with the Sunday for 3/28 this past Sunday's strip. Above is my rough layout for the strip, i did it pretty loose and quick and then took a marker and tightened it up a bit. This was a hit the ground running type of situation as I was still in the "fill-in" category and I had to try and back-search the JP archive to find ref for Abbey's house, the kitchen, etc. It wasn't easy on short notice. I've since gotten a whole bunch of ref that will make this easier in the future. next step i blew this up on my copy machine and then took my lightbox out and transfered the layout to the final strip size. I tightened the pencils up, and then went straight to inks, which you can see below. 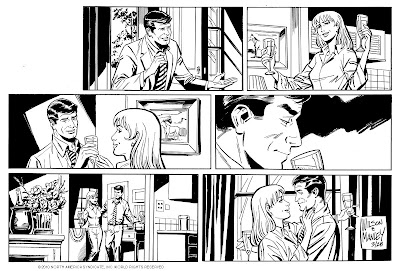 I was trying here to keep the style closer to Barreto and used a lot of brush to keep it bold and add little accents with the brush. the hardest things was trying to create in my mind a real stage for the characters when I only had slivers of what that space looks like. I really like to have a complete stage for my characters to act on and that gets cut on a strip pretty easy to to the fact that they are reproduced so small now. I inked using mostly a #4 sable and a hunt 108 pen nib, and i was using some Dick Blick Black Cat ink I bought. Its good for the pen but a little think for the brush as I like the ink to be a little denser for the brush. 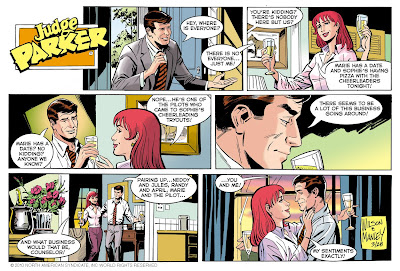 Here is the final colored strip. I put the lettering on in photoshop as well. I would prefer the lettering to be on the original but that really isn't possible for right now and I guess it's my "old school" esthetics showing through as I like it to be on the original. King Features gave me a coloring guideline to follow technically but other than coloring so that no combination of colors over-saturates more than 160% I am pretty good.I felt a little better on this strip and it was the first time I got to draw Abbey which I know many people were looking to see how I'd handle her. I was think very much of leonard Starr and John Romita on this strip, both artists were fantastic at this type of strip and work. I recently ordered a bunch of the reprints of On Stage which reprints the first several years of the strip--amazing, amazing stuff. I think Starr is one of the most underrated classic strip artists, I wonder if its because most think of On Stage as a melodrama and not an action strip?
Posted by Mike Manley at 4:54 PM

I am anxious to see what you do with it going forward, compared to Barreto's take on it. He did an excellent job with it. So far, I am liking what I am seeing.

Especially this week. I believe your third week on the strip. I think you posted previously that the first couple of weeks were from a "cold start". Week 3 you are on the money in terms of the characters look and backgrounds. Plus the lettering is the same as Eduardo's. Nice touch, it fits well with your work, too.

Agree, that Leonard Starr was one of the more underrated artists. On Stage probably didn't get him the credit he deserved because of it not being an action strip. Stan Drake on Juliet Jones was outstanding as well. The nice thing about Parker is at times the action picks up, as when Dixie Julep entered the picture about a year or so ago, when Sam ventured to Phoenix for the Judge's book deal. Murder and mayhem ensued at the Apache Sands. It was a great story and Barreto's art in the six month story arc was outstanding. Great use of framing, terrific backgrounds, sexy characters, plus there was action that lead to a gun battle in the desert. I think it went from June 2008 to early January 2009. Check it out if you have the entire Barreto run for reference.

Best wishes going forward and would love to see more of the process of the art of Judge Parker.

Thanks for posting this! I'm stoked that you're doing the Parker strip. There is definitely a lineage going from Raymond to Williamson to yourself.

Really liking the art on Judge Parker, Mike. Very cool on the process of what you go through. Would love to see how you match it up with the script from Woody Wilson. I must say, I like your Abbey Spencer this week ( and today, 4/1), as to the one in the Sunday strip (I realize it was your first attempt at her). But, who am I, I could barely even draw a stick figure. LOL.

Here is what I was asking. Thanks Mike.
The process.
The comic strip looks fantastic.
In general I don´t really like to see comic strips in color, because I like to see the lines.
But the colors here looks great!!!
I hope to see the strip colected in a book.

Really liking the look of the strip this week, Mike. You seem to be bringing it into your own. Awesome attention to detail. Especially the backgrounds. And, GM or Ford should hire you to draw their cars. Nice!

Thanks everyone. The backgrounds are important to me on any strip or comic because they are really a way to do two very important things, 1) make the world in the story believable, 2) as design.

They must serve those two functions or the work will be weak and unconvincing no matter the style. I always hated it when an artist cheated on drawing cars or fashions, faked stuff. Like on those old TV shows when they'd show a computer that did nothing like a real computer or showed hippies wearing cur coats and weird striped shirts, etc.

What i always admired where artists who brought a commitment and honesty to their work. Raymond, Sickles/Caniff, Foster, those men were giants and workhorses, they really set the tone on the strips, the next generation, artists like Prentice, Starr, Drake, Robbins, Lubbers and Williamson to name a few also continued on in that way.

The audience was adults--they knew if something was funky.

The fact is that its harder now in some respects because the strips are sooooo small. My parents have clipped and mailed me the strip out of the Detroit Free Press--wow!

Its printed so small, even smaller than I thought..so lots of details are really almost obliterated.

Mike Manley said...
This comment has been removed by the author.
11:15 AM

I very much appreciate your appreciation for the classic, "old schoolers", like Drake/Robbins/Starr, etc. While the newspapers of today don't do the comics right by printing them so small, there are still ways to view them in a larger manner via Comics Kingdom. However, a small portion of the readers will read and follow their comics that way. It does cause a creator, like yourself, to have to constantly analyze how much detail to put into the backgrounds/lettering, etc. In my opinion, Graham Nolan and Eduardo Barreto seemed to strike a good balance with their comic strip work, with just enough detail to backgrounds, framing and lettering. Barreto struggled early on with the lettering in Judge Parker, with the font, then the size of it. He hit his stride in the latter part of his tenure on Judge Parker. Both Graham and Eduardo use and used close ups and different angles to still make the strips jump off the page in the paper, even when they were shrunk so much. Barreto seemed to use a lot more black in backgrounds and other ways, to give very good contrasts, that allowed Judge Parker to standout.

Your first few weeks on JP have been very good, Mike. It's never easy, when taking over a project from someone who the readers have become accustomed to. I do commend you for being a student of the past and being able to use that knowledge of how the characters are supposed to look and act going forward.

Great job! Excited to read about and see much more of your work on Judge Parker!

Not to be the bearer of bad news, but perhaps you have already heard. My paper in Birmingham (the Birmingham News) just yesterday announced they were downsizing the Sunday comics from 6pages to 4 pages. They are cutting four comics, including Judge Parker. Others that are being bounced out of the Sunday paper are, Doonesbury, Prickly City and Cathy. To make matters worse, they also are taking the Judge out of the daily comics. Doonesbury and Prickly City are being relegated to the Editorial section and Cathy only appeared on Sunday.

Just so you know, I emailed the Editor, Tom Scarritt, who made the announcement. His email address is tscarritt@bhamnews.com

I hope other readers in Birmingham feel they way I do and can help save the Judge. I was looking forward to seeing your work on Judge Parker.

Great to get to see your process for Judge Parker. I'm always fascinated to read the process that anyone goes through in creating their final product. It is very useful to see and read about what you go through and keep that in mind as I work on my own stuff.