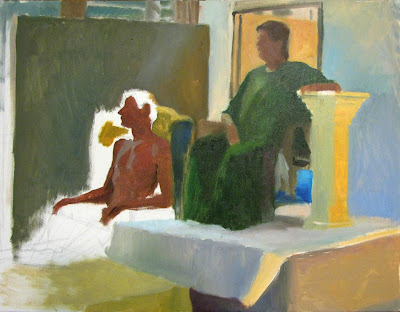 If this was a NFL football season this would be my BYE week, at least I felt that way. It happens at least once a semester--even twice sometimes where the commercial work builds up and deadlines clash and I have to skip classes to catch up. Now its not all bad as having the work pays for me to go to school, pay the bills and eat. Still I hate to miss digging into my school work, but thats the way it is.And working on things like laying out Magnus can be fun too.

So this week is pretty light in that way as far as school work, though I have been churning out work like mad in the studio at home. In Scott Noel's class I didn't get far in this painting, a shame as I feel it had a good strong start. Luckily I will have one more long pose in the class till the end of the semester. I did register for the spring sememster so I will have only two classes, one with painter Alex Kanevsky. 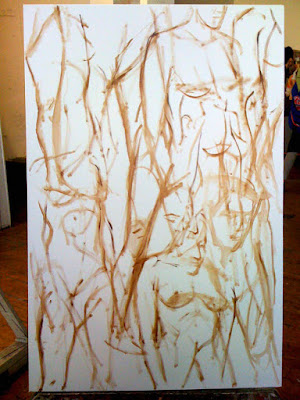 trying something different with the figure by fracturing in...

In Bruce Samuelson's class we also start the last pose of the semester. I am trying something a bit more abstract--this is by rough start after doing a few sketches. I'll see how it goes in the next two sessions, if I don't dig it, I might abandon it and do something more traditional. I like some abstract work but don't feel that is really my thing, so often I feel lost of somehow not as excited about painting when I do it. I don't feel honest. But art school is about risks and challenging yourself, and the worst that can happen is I don't like what I do, and then just scrape it off or make a bad painting and do something else. You can learn from bad paintings just as much something that is done well. The semester is down to basically a month left and at Uarts where I teach storyboarding, my class has embarked on their final assignment, the animatic for their junior piece. I can almost smell the turkey in the oven now, once we hit Thanksgiving its all but over for the school year.

The DPC gang and I also hit up First Fridays in Philly last night, we hit the Gross McCleaf gallery which reps several of the teachers from PAFA, including Doug Martenson, who had an opening last night. Then we hit Artist House where david Palumbo had a show, his brother had a show last month, both being PAFA Alumi, then we hit the Rodger Lapelle Gallerywhere another of our teachers Pat Traub had a show of her work. 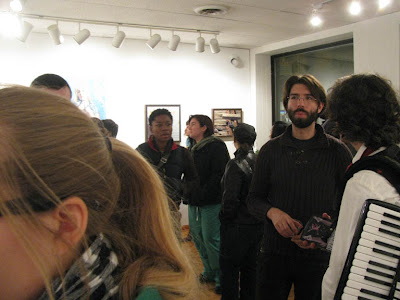 We beat it back to the school and then I drove the gang over to West Oak lane to the book signing for my great buddy Jamar Nicholas's new graphic novel, Fist Stick, Knife Gun. 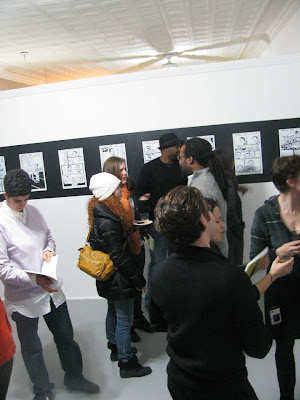 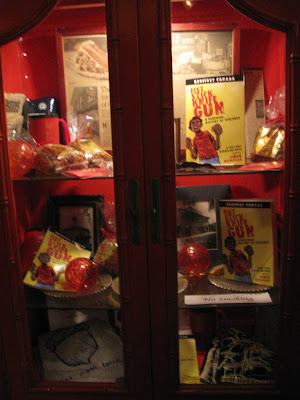 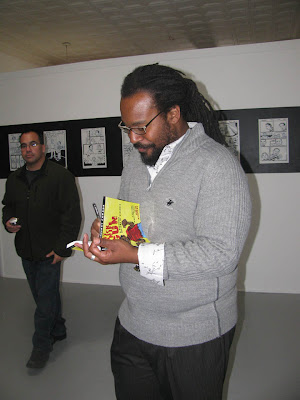 Jamar signing copies of his book 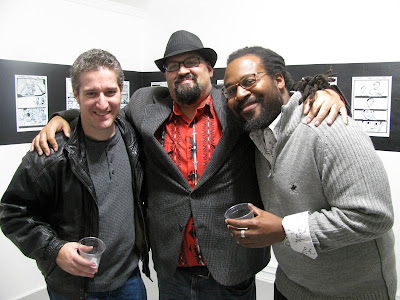 Rich Faber, Me and jamar
Posted by Mike Manley at 2:04 AM