Because the deadline was so tight Scott penciled the last page of Killer Stunts and e-mailed it to me as a tiff file. I downloaded and unstuffed it, then converted his greyscale image into non-photo blue by first converting it into RGB, then into INDEX COLOR. The next step is to convert the greys in the CUSTOM setting into the non-photo blue. This then turns the drawing into a non-phot blue version of the pencils.
The next step is for me to retsart my G4 into Classic, or 9.2, since my version of Quark isn't OSX compatable ( not spending the $cake$ for a new version until I have too).

In Quark I have a template all set up for comic page size so I can print the pages out on my Epson Photo 1200, which prints tabloid size. 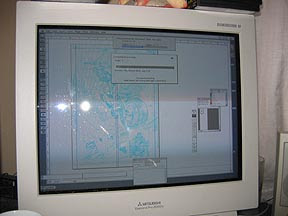 The next step is to first print out a test image, which I do to make sure everything is running fine and I don't waste a lot of ink or paper. 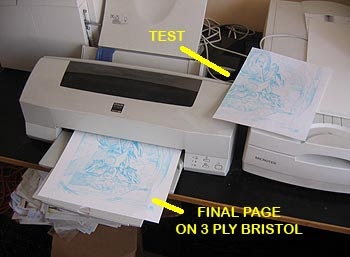 Once that's done I go into the drawing studio ( I have two seperate studios, one with the computer, scanner, printer and copy machine, etc.) Now I'm ready to ink! 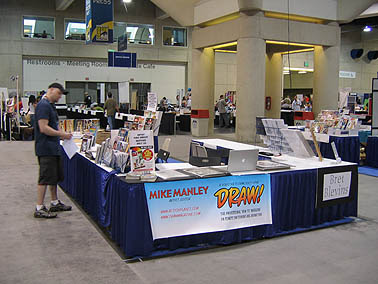 Here are my tools. Pretty basic stuff, a triangle, french curves, #3 brushesm rapidoliners, and a Hunt 103. I use two seperate ink bottles, fresh ink for the pen, and older thicker ink for the brush. When the pen ink gets too thick I dump it into the brush ink. 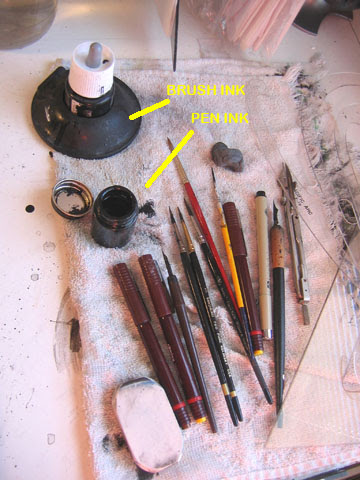 Thanks Alex, I hope you enjoy the window into my "madness".
I will try and show how I'm working each day....